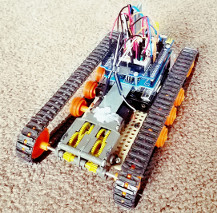 It is not a secret that procrastination is the favorite activity of most PhD students. I have been procrastinating today, even though my advisor probably wants me to keep writing.  In the midst of my procrastination, I thought: “Why are there self-driving vehicles, but no database-driven vehicles?” As absurd as it sounds, I gave it a try. And now I proudly present the prototype of the world’s first(?) datastore-driven vehicle. The implementation was quick and simple. I took the Voldemort code I have been tinkering with in my Voldemort traffic light post, and changed it to send the signals over Bluetooth connection to a Frankenstein-of-a-car I’ve built very quickly out a few motors, a gearbox, an Arduino, a bunch of wires, some tracks, and lots of thermal glue.

The car changes the direction of travel when the workload characteristics change: it will go straight when number of read operations is the same as number of write operation.  By changing the read-to-write ratio of the workload, the car will turn either left or right. The prototype vehicle is not very responsive (weak motors/dead batteries) and sometimes runs into things despite my best attempts to control it.

And now, once the world has a database-driven car, the procrastination can continue… Or should I start writing?