In the previous posts I summarized Raft and EPaxos. These two algorithms are used to achieve consensus in the distributed system, so for example when we deal with replicated state machines, these algorithms allow each replica to be an exact, consistent copy of each other. So, it is logical to assume that Inconsistent Replication will not produce the same replicas all the time, so our state machines can end up in different states. Why would we want to have a replicated state machine with various copies potentially being in different states? According to the authors of the paper it is faster than consistent replication, yet can still be used in some applications, such as transaction commit. I think the usage of IR will not be as straightforward as using consistent replications, since users of IR must also design their applications in such a way that tolerates the inconsistent state of the nodes.

IR does not guarantee the order in which each command is executed by replicas, thus replicas can reach different states unless the operations are independent of each other.  The figure below illustrates hot this can happen. 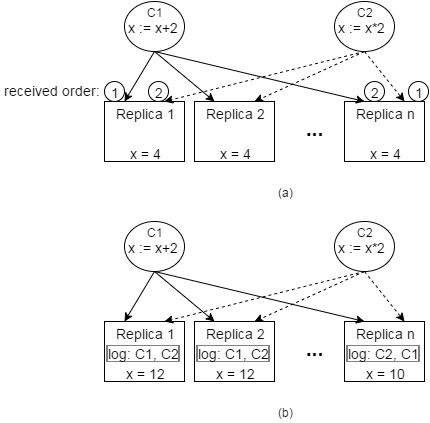 This notion of retrying the operations until they eventually succeed makes me question whether it is a good solution especially under various kinds of loads.  If the system deals with mostly independent requests it may not be difficult to reach consensus in consensus operation mode, but if there are lot of contention between requests, the system may just be stuck retrying all the operations without doing much of a useful work.

I am not going mention IR recovery mechanism described in the paper, but it is worth noting that during the recovery the entire system blocks and stops responding to new requests. The process is initialized by a recovering replica communicating to all other nodes, and once each node learns that some other replica is recovering from a failure it stops processing the requests until the protocol is finished and normal operation can resume.